By ignoring Russia’s virulent homophobia, FIFA is complicit in the attacks against queer footballers that have occurred during the 2018 World Cup. 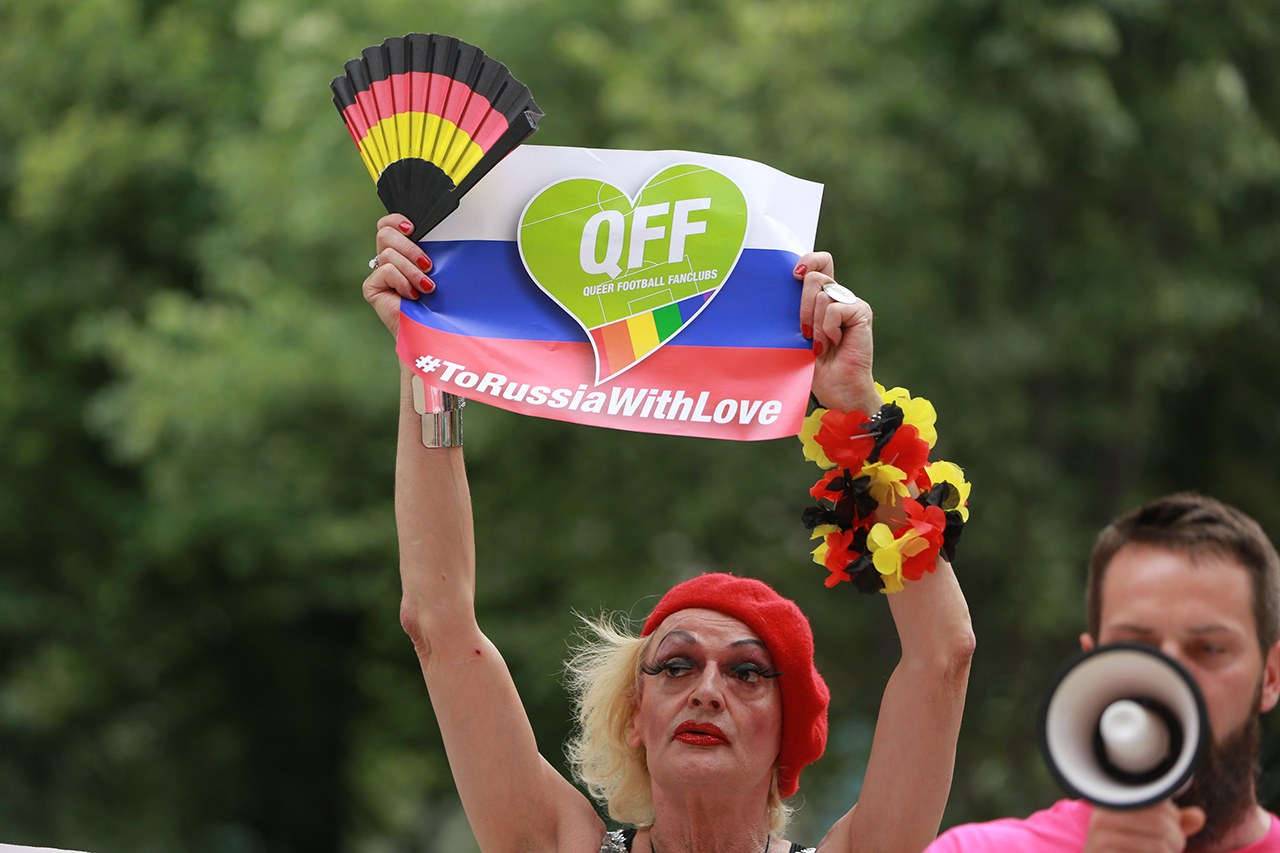 As World Cup fever grips the globe, stories have surfaced detailing episodes of violence and discrimination against LGBTQ+ individuals, both directly and indirectly connected to the game. In St. Petersberg last week, a gay Frenchman and his companion were severely beaten and left with brain injuries while visiting for the games; that same day, British gay activist Peter Tatchel was arrested and freed in Moscow after protesting Russia’s failure to take action on Chechnya’s “gay purge” outside the Kremlin. In May, it was reported that Russian football fans had sent life-threatening emails to the LGBTQ+ soccer fan association Pride In Football, warning that queer fans would be “rooted out and stabbed” at the games. Before the Cup, there were multiple warnings to queer football fans travelling from abroad not to express public queerness, and verbal threats from Russian Cossacks in Rostov-on-Don, one of the World Cup’s host cities, that they would patrol the streets looking for “kissing men.”

These incidents and more betray the deep homophobia that pervades Russian culture, the host country of this year’s World Cup. Having Russia host this year’s games was a source of controversy within the football world from the beginning, leaving many uneasy about the message conveyed by allowing a country responsible for grave human rights abuses and anti-LGBTQ+ discrimination to host one of the most-watched sporting events in the world. In many ways, by allowing Russia to host the games, FIFA has become complicit in the anti-queer violence that has occurred as a result, and in many ways, has chosen money and sponsorships over human rights in their actions.

The Putin regime has long used LGBTQ+ people as a scapegoat to bolster Mr. Putin’s presidency, fostering anti-queer discrimination to distract people from genuine issues facing Russian society, including poverty, high rates of mortality, youth suicide, alcoholism, and more. Over the past five years, these anti-LGBTQ+ stances have become more vocal, vivid, and brutal. Since a 2013 law began criminalizing “propaganda” surrounding “nontraditional” sexual relationships, untold hundreds of LGBTQ+ journalists, activists, educators and more — including myself — have been forced to immigrate out of the country. In a report released last year, the Center for Independent Social Research found that queerphobic hate crimes had doubled in the country since the law was passed.

And yet FIFA and all of the organization’s Western sponsors turned a blind eye to these atrocities. Gravest among them may be last year’s genocide of queer people in the Republic of Chechnya, in which 100 LGBTQ+ people, predominantly gay men, were rounded up in the country and put in secret detention centers. There, they were tortured, abused, humiliated, and some even murdered or driven to suicide. The genocide forced queer people to flee their homes in Chechnya and seek safety; earlier this year, it was reported that Russian authorities had failed to open any criminal cases or publicly rebuke Chechnya’s human rights abuses one year on from when they were first reported.

A few months before the World Cup, pressure exerted by the international community, foreign leaders, and human rights activists led Russia to conduct a mysterious “investigation” into the events that had occured in Chechnya. Its final report, issued this May, stated that “there weren’t any human rights violations in Chechnya, as gay people did not exist there at all.”

I am just one of thousands who have experienced violence and the direct consequences of Russia’s homophobic environment, and I and those like me can feel and relate to the pain and suffering of the LGBTQ+ individuals in Chechnya, queer football fans experiencing violence during the World Cup, and ongoing discrimination the LGBTQ+ community continues to face in Russia. We cannot continue to tolerate the hypocracy of FIFA and its support of Putin. Tonight, RUSA LGBT (Russian-Speaking American LGBTIQ Association), a network of immigrants and asylees from the Former Soviet Union countries, are holding a protest against the World Cup in Times Square, and we demand that FIFA and sponsors of the World Cup take a decided position against the Russian Government and its hostile, brutal, violent, and anti-human politics against LGBTQ+ people. We also demand that FIFA improve its policies on acceptance and inclusiveness of LGBTQ+ players. Without these steps forward, football will remain a sport in which queerphobia thrives, and the World Cup will remain a global sporting platform complicit in the discrimination of queer people everywhere.