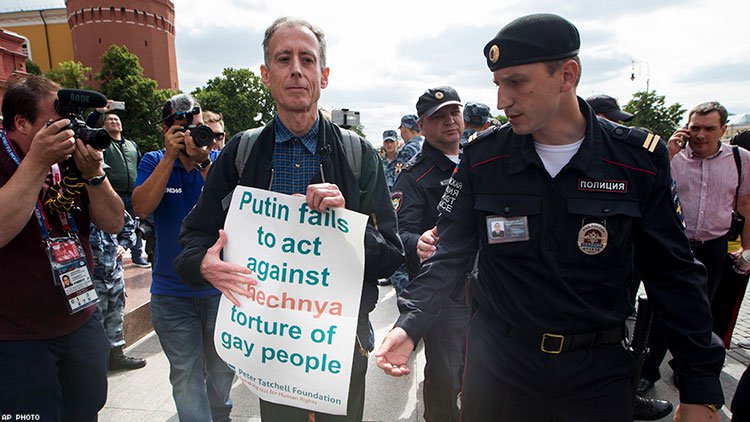 An LGBT activist was arrested in Russia for staging a one-man protest.

Peter Tatchell, a British citizen, was detained Thursday in Moscow, the first day of the 2018 FIFA World Cup, for speaking out against the Eastern European nation’s inaction toward human rights abuses in Chechnya, a region of Russia.

“Putin fails to act against Chechnya torture of gay people,” read the sign held by Tatchell.

Tatchell was taken to a police station by several officers and released later that day, reports CNN. The activist will have to appear in court on June 26 because, according to a post on his Twitter, he is “charged with violating Federal Law 54 & Presidential Decree 202, which prohibit all protests near the Kremlin & during World Cup.”

After being released, Tatchell posted video of his arrest and explained how he had wanted to prevent a “PR coup” from the antigay nation for hosting an international sporting event.

“My Moscow protest was in solidarity with heroic Russian & Chechen LGBT people. I salute & support their struggle,” he wrote in the post. “The human rights abusing Putin regime must not be allowed to score a PR coup with the World Cup. There can be no normal sporting relations with an abnormal regime.”

Since last year, at least 200 gay and bisexual men may have been detained and as many as 26 killed in Chechen concentration camps, according to reports from LGBT groups and the Russian newspaper Novaya Gazeta. In May, a representative of Russia told the United Nations that an investigation found no evidence of crimes against LGBT people in Chechnya — or even LGBT people in general.

“I was exercising my lawful right to protest, under the Russian constitution, which guarantees freedom of expression and the right to protest in Articles 29 and 31,” he said in a statement submitted by the Peter Tatchell Foundation. “A one-person protest, which is what I did, requires no permission from the authorities and the police.”

“Getting arrested is standard for Russians who protest for LGBT+ rights or against corruption, economic injustice and Russia’s annexation of Crimea and its bombing of civilians in Syria,” Tatchell added. “Unlike brave Russian protesters, I have the ‘protection’ of a British passport, which means I have been treated more leniently than they are. My fate was mild compared to what often happens to Russians who dare to challenge the Putin regime. I am awed by their courage.”

It is not illegal to be gay in Russia, but homophobia has been on the rise in the past several years. A recent poll from the Levada Center found that 83 percent of Russians, regardless of age, think gay sex is “always reprehensible” or “almost always reprehensible.” Activists have advised LGBT fans in attendance at the World Cup not to hold hands or exchange public displays of affection.