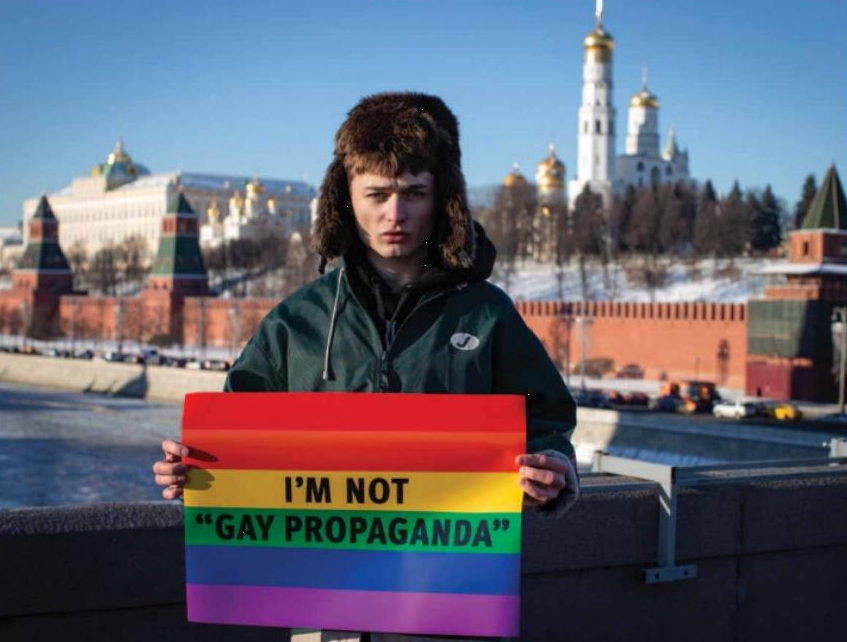 Russian blogger, Zhenya Svetski, stands with a sign reading “I am not ‘gay propaganda’” in Moscow, December 2018. © 2018 Dmitry Belyakov for Human Rights Watch

Lesbian, gay, bisexual, and transgender (LGBT) youth in Russia face formidable barriers to enjoying their fundamental rights to dignity, health, education, information, and association. In Russia, antipathy towards homosexuality and gender variance is not new—LGBT people there have long faced threats, bullying, abuse inside their families, and discrimination—but the 2013 “gay propaganda” law has increased that social hostility. The law has also had a stifling effect on access to affirming education and support services, with harmful consequences for LGBT youth.

Russia’s “gay propaganda” law is a classic example of political homophobia. It targets vulnerable sexual and gender minorities for political gain. When Russian president Vladimir Putin signed the federal law in June 2013, he pandered to a conservative domestic support base. And on the international stage, the law helped position Russia as a champion of so-called “traditional values.” The legislation, formally titled the law “aimed at protecting children from information promoting the denial of traditional family values,” bans the “promotion of nontraditional sexual relations to minors”—a reference universally understood to mean a ban on providing children access to information about LGBT people’s lives. The ban includes, but is not limited to, information provided via the press, television, radio, and the internet.

The law has been used to shut down websites that provide valuable information and services to teens across Russia and to bar LGBT support groups from working with youth. But the law’s effects have been much broader: individual mental health professionals have curtailed what they say and what support they give to students, and the law gives the strong imprimatur of the Russian state to the false and discriminatory view that LGBT people are a threat to tradition and the family. Significantly, mental health providers we spoke with said the law interferes with their ability to offer honest, scientifically accurate, and open counseling services, leading some to self-censor themselves or set out explicit disclaimers at the start of sessions to avoid running afoul of the law.

Given the already deeply hostile climate for LGBT people in Russia when the law was passed, it is not surprising that its passage coincided with an uptick in often-gruesome vigilante violence against LGBT people in Russia—frequently carried out in the name of protecting Russian values and Russia’s children. And while Russian government officials and parliament members claim that the goal of the “gay propaganda” law is to protect children from potentially harmful subject matter, the law in fact directly harms children by denying them access to essential information and increasing stigma against LGBT youth and their families. As the European Court of Human Rights concluded in 2017, the law reflects and reinforces “predisposed bias, unambiguously highlighted by its domestic interpretation and enforcement.”

This report—based largely on interviews with LGBT youth and mental health professionals in diverse locations in Russia, including urban and rural areas—documents the situation of LGBT youth there today. It looks at their everyday experiences in schools, homes, and in public, and their ability to access reliable and accurate information about themselves as well as counseling and other support services. As one mental health provider explained, “The whole situation is just worsening. As of today, teachers and teachers-psychologists are not allowed to speak positively [on LGBT topics]. They can’t just say to a kid, ‘Hey, everything is normal with you.’”

LGBT youth interviewed by Human Rights Watch described feelings of intense fear of disclosing their sexual orientation or gender identity in their daily lives, as well as distrust in the individuals and systems that should provide them safety and refuge. This fear extends beyond the school walls: some of the students Human Rights Watch interviewed said that others in their communities also threated and physically abused them.

While some LGBT youth told us that teachers had supported and protected them, many others said their teachers characterize LGBT people as a symptom of perversion imported from Western Europe or North America, mirroring the political homophobia that motivated the passage of the “gay propaganda” law in the first place.

For some, peers are a source of relative support and openness—when compared with how their parents and teachers relate to issues of sexual orientation and gender identity. Others, however, face harassment, bullying, and discrimination at the hands of their classmates, who often repeat the stereotypes, misinformation, and noxious anti-LGBT rhetoric pervasive in Russian media. Some students heard comments from classmates suggesting that LGBT people do not deserve to live.

Nearly all of the youth we spoke with described intense feelings of isolation, which they attributed to persistent anti-LGBT rhetoric and hostile social attitudes. Their sense of isolation was exacerbated, they said, by the “gay propaganda” law. Repeatedly, they explained that their primary struggle is not coming to terms with being different as such, but rather finding accurate information about gender and sexuality in a hostile environment.

In the absence of accurate information and safe access to community spaces, or support from teachers and school mental health staff, many LGBT youth turn to the internet—an embattled, politicized, and often-censored space in Russia. However, the “gay propaganda” law has also restricted access to information about gender and sexuality online.

Mental health professionals we spoke with strongly echoed what LGBT youth said. They spoke of growing fear and anxiety among such youth since the law passed and an increase in demands for counselors attuned to LGBT issues, but also pervasive ignorance among psychologists and new self-censorship even among those who understand the issues and want to play a positive role in the lives of LGBT youth. One psychologist described how even in situations where it is clinically relevant to discuss a child client’s sexual orientation, he feels constrained by the law: “Teenagers often wait for me to ask a direct and precise question about his or her sexual orientation or gender identity, but the law prevents me from doing that.” A social worker pointed out that the law “is an effective means of intimidation.”

Psychologists told Human Rights Watch that the “gay propaganda” law has limited their ability to be fully candid on questions of sexual orientation and gender identity. Some explained that they felt forced to speak about sexual orientation and gender identity only in euphemisms, or to say explicitly at the outset of counseling sessions that they cannot and will not disseminate “gay propaganda” in attempts to dispel in advance any notion that they are violating the law.

By sending an official message approving the marginalization of LGBT people, psychologists told us, the “gay propaganda” law increases the challenges youth face. And by erecting legal barriers between marginalized youth and the support services and information they need, the law does significant harm.

Deti-404 is an online group that offers psychological support, advice, and a safe online community for LGBT children, including those who experience violence and aggression because of their real or perceived sexual orientation or gender identity. “Deti” (дети) means “children.” The “404” in the group’s title is a reference to the standard internet “error 404” message indicating that a webpage cannot be found, so the group’s name can be read as referring to children who have been erased in official terms. Elena Klimova, a journalist and LGBT activist, launched Deti-404 while the “gay propaganda” law was pending in the parliament.

On June 10, 2013, Yelena Mizulina, the author of the law at the State Duma, the lower chamber of Russia’s parliament, told reporters that the Deti-404 website did not constitute “gay propaganda” under the law. “Such a project is not concerned with the propaganda of non-traditional relationships,” she said. The reporter then asked her: “What is it like for these children when they discover that they are not like everyone else? How do they get information that it is not a disease, that it’s okay?” Mizulina replied:

Information that is explanatory, or descriptive, or which does not call for anything, which is not provocative, which doesn’t depict non-traditional sexual relations, is not propaganda, it can be legally accessed by teens.
The next day the State Duma voted unanimously to pass the law.

Deti-404 has gained tens of thousands of members since then and has become a crucial source of information and refuge for LGBT youth in Russia. But contrary to Mizulina’s assertions, Deti-404 has been a consistent target of the “gay propaganda” law in its five and a half years of existence.

Klimova has been charged under the “gay propaganda” law three times for operating Deti-404 and forced to change its digital location or re-launch the group to keep it functioning. Since a 2016 court decision, the group’s website, www.deti404.com, has been formally blocked in Russia.

By enshrining discrimination in national law, Russia’s “gay propaganda” law violates Russia’s international human rights obligations. International bodies—including the European Court of Human Rights and the United Nations Committee on the Rights of the Child—have strongly condemned it for this reason.

Our interviews show that Russian youth are resilient amid the onslaught of anti-LGBT rhetoric, negative social attitudes, discriminatory laws, and persistent misinformation in their lives. The “gay propaganda” law, however, risks inflicting long-term harm on generations of Russian youth by encouraging discrimination and curtailing access to support services. The path forward requires repeal of the law and other reforms that uphold the basic rights of LGBT youth to freedom of expression and access to information. Mental health professionals, for their part, should not have to look over their shoulders when providing counseling and other services to LGBT youth: they should be free to provide counseling based on evidence and international best practices, not societal fears backed by repressive legislation.